The UK’s only official Highways Search

A Highways Search is one of the most important searches that solicitors, homebuyers, vendors, businesses, surveyors, developers and lenders require to make an informed decision about a property transaction and its suitability as lending security. 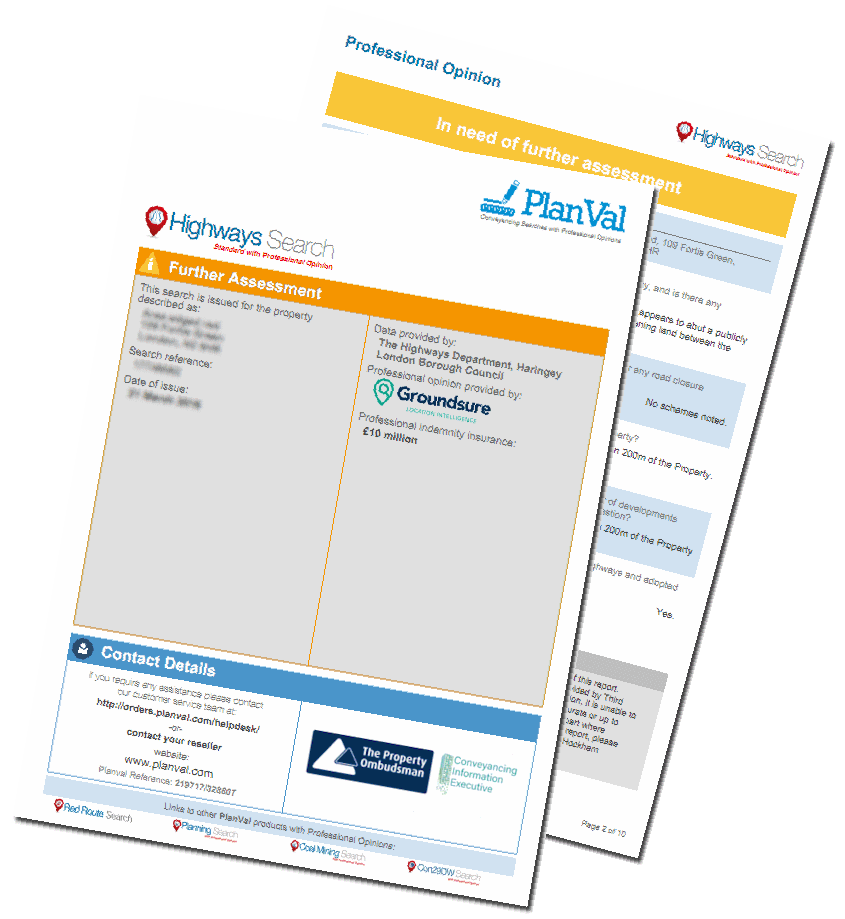 To provide legal certainty, it is essential that the underlying Highways data is fully up-to-date.

Old and out-of-date information is potentially invalid and could lead to serious repercussions with trunk roads, ransom strips, schemes, auctions and developers.

Highways Departments do not recommend the storing in a database or reuse of Highways Search Information as the data may change on a daily basis and could therefore be out-of-date.

Highways Departments have no responsibility or liability for non-official searches or data.


What about Publically Available Information?

The local knowledge that is also applied and used in PlanVal Highways Searches is often not held on file or computer but has been learnt over years of highways experience by the technical officers that compile the search reports.

Even if an area falls outside the standard 200-meter boundary normally used on a Highways Search, technical officers often include schemes outside the area to give a better overall picture of the area searched.

Highways Searches have the provision to show cycle paths and bridal ways that may or may not be on old railway lines, these are not shown on local development plans.

Highways departments are in possession of original maps that show the adopted highways many dating from 1909 or earlier. Some have been digitalised and certain councils are in the process of overlaying with up-to-date adopted borders. Many Highways Departments, when compiling a search, if they believe there may be an issue or have something on their mind with reference to the Search data will refer to these historical maps.

These maps have unique information regarding common land and where a land change may have taken place, for example the corner of a road now owned and adopted privately, most of these changes on the original maps were initialed by the officer that oversaw and agreed to the changes, some of these initials date back to when the maps were produced, the highways department can tell by these initials which employee agreed to the change. These maps are accessed by the staff of the council and are not on public view.

It’s a commonly held misconception that Highways Information is aggregated or stored in external databases which can be searched to form an opinion. Highways Departments do not provide data sources to third-party private companies as the data is complex and subject to change on a daily basis country wide.

Equally the data that is made available during a Personal Search, although more enhanced than publically available data, is frequently out-of-date.

Official Data – is it really necessary?

The following real-world examples highlight the vital importance of official data and the responsibility, accountability and liability that Highways Departments have for the provision of accurate data in PlanVal Highways Searches

The road outside the property was used by a local resident for selling cars, the council did not have the powers to stop this as the street was not adopted (even if the street were adopted we were advised that actions are very limited but the officer thought they could not stop the activity even if it were an adopted road) so the practice continued.

So a common sense approach was agreed and implemented by the Highways technical officer, planning office and roads maintenance department: a new white line scheme of painted parking bays was completed. This was not recorded as a scheme and the potential new vendor would not have had this information if official highways search data had not been used. If considering purchasing a property this information could have a significant bearing for purchaser and lender.

Accuracy of Information for a new Development

A Welsh official Highways search result some years ago showed all the adopted roads for a new development. When the development had started a resident came forward claiming that one end of the piece of land was owned by him and was not adopted. The access to the development was limited by this piece of land known as a ransom strip.

In order to have full access to the development the the developer paid £1.3M for this land (also known as a ransom strip), the developer then successfully sued the Highways department for the full amount plus costs on the basis of the official Highways data.

The Highways data was not in fact incorrect, been examined at the correct level of magnification, the strip of land being only 30cm was missed, (the local authority was taken to the cleaners). The Highways department in question made changes to their procedures to eradicate this issue reoccurring by using a much greater zoom on the area to be searched, once satisfied the map was zoomed out to the industry standard to compile their report.

South Wales trunk road agency (TRA) had agreed the building of a new by-pass, the new road was to pass the village to the south. A farmer had a line of trees that he wanted to preserve so the TRA agreed to change the road to go north of the village to preserve his trees. In the month that this was having the final hearing to agree the re-routing to the north the farmer had a cottage that would need to be demolished if the trunk road was build to the south which he sold during this month. The hearing concluded that the road should be built to the south resulting in the new owners having to compulsory sell their cottage for demolition. 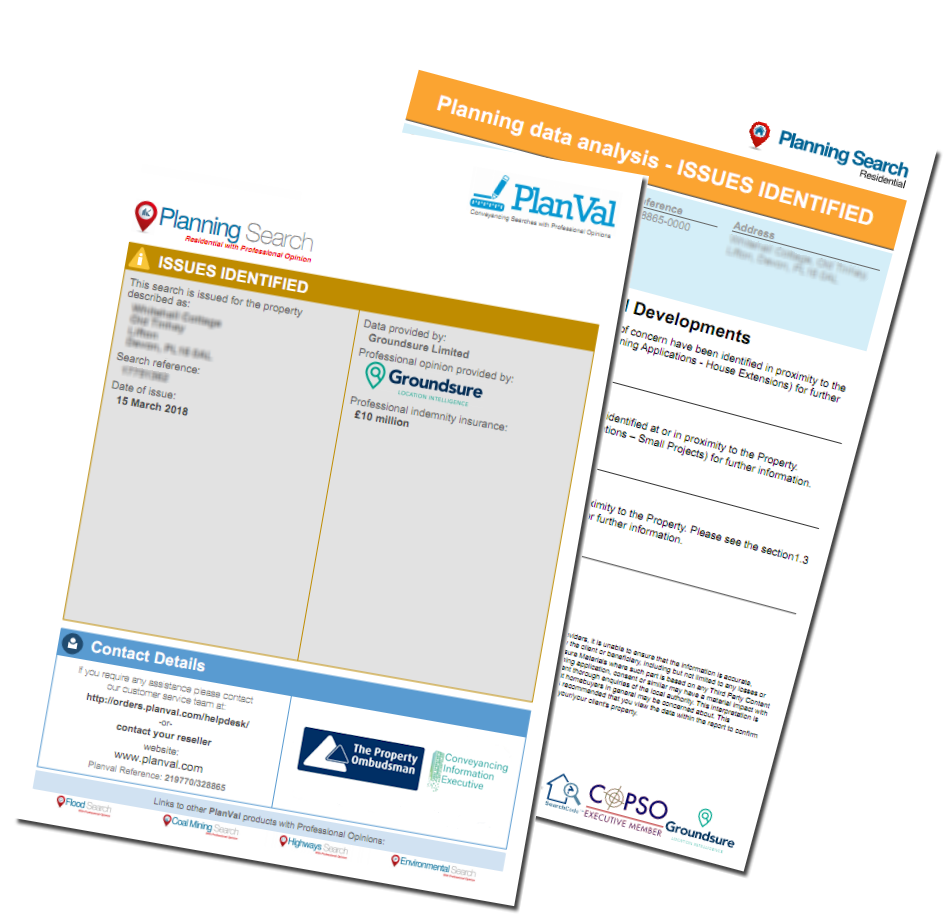 
Insight on local development and construction projects can give you and your client a view of the material impact on the value your client places on a property in an area.

Insight on local development and construction projects can give you and your client a view of the material impact on the value your client places on a property in an area.

Planval Environmental Search with Opinion allows solicitors to comply with the requirements of the Law Society Practice Note on Contaminated Land and considers the risk of the property being designated under Part 2A of the Environmental Protection Act 1990, together with other key natural and man-made hazards. 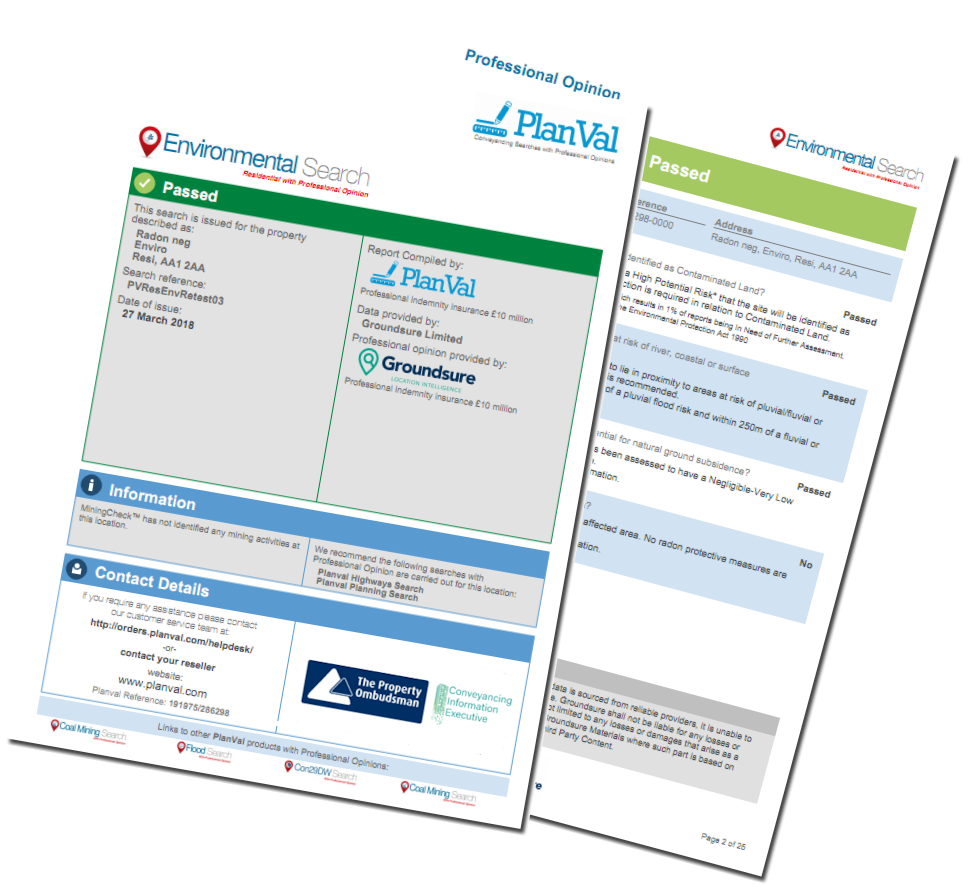 Planval Flood Search with Opinion uses a detailed water and drainage risk model devised by industry experts, and provides detail on all potential flood hazards – not just river and tidal. The report includes unique risk analysis as well as a view on flood risk insurability and offers access to IEMA qualified environmental consultants for further advice and support. 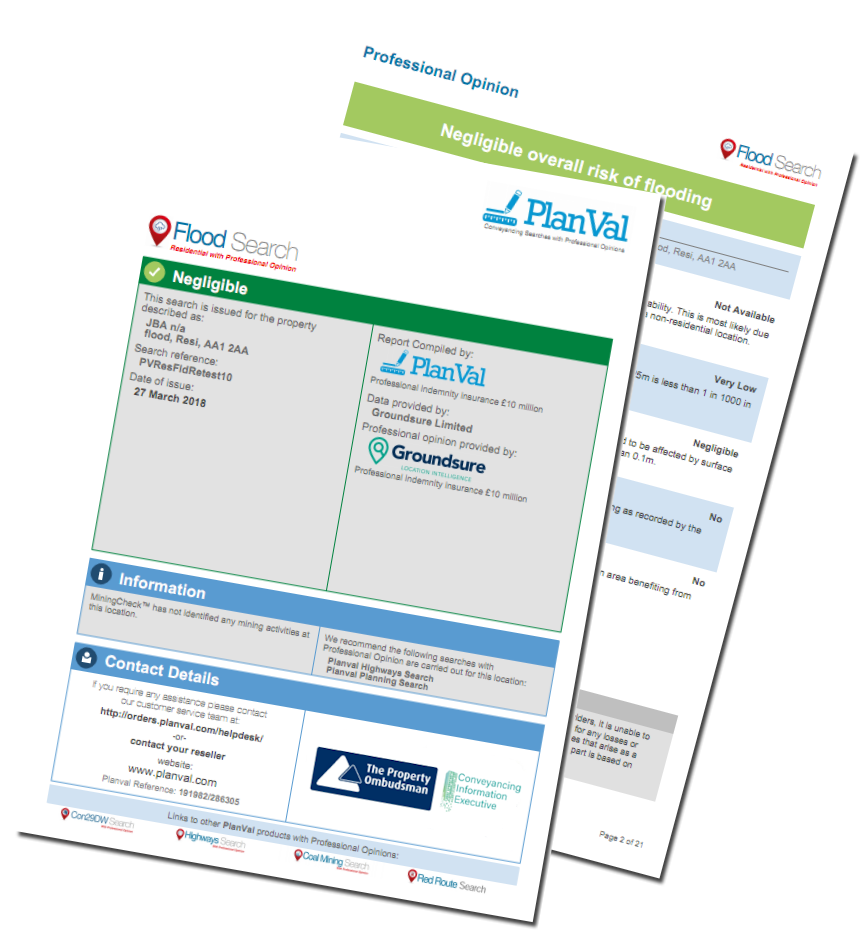 Planval Flood Search with Opinion now includes JBA 5m groundwater data in addition to all other flooding sources and uses Land Registry polygons to ensure a comprehensive accurate assessment of all flood risks, reducing the need for further searches.

The report includes unique risk analysis as well as a view on flood risk insurability and offers access to IEMA qualified environmental consultants for further advice and support.

PlanVal Mining Check accurately identifies Mining Risk areas using individual characteristics and attributes combined with official data from The Coal Authority (TCA) and independent data drawn from 39 years of independent assessments and inspections. Our unique data and professional opinion considers 64 mineral types and the mining and/or quarrying, depth, area and extent of the area of risk. 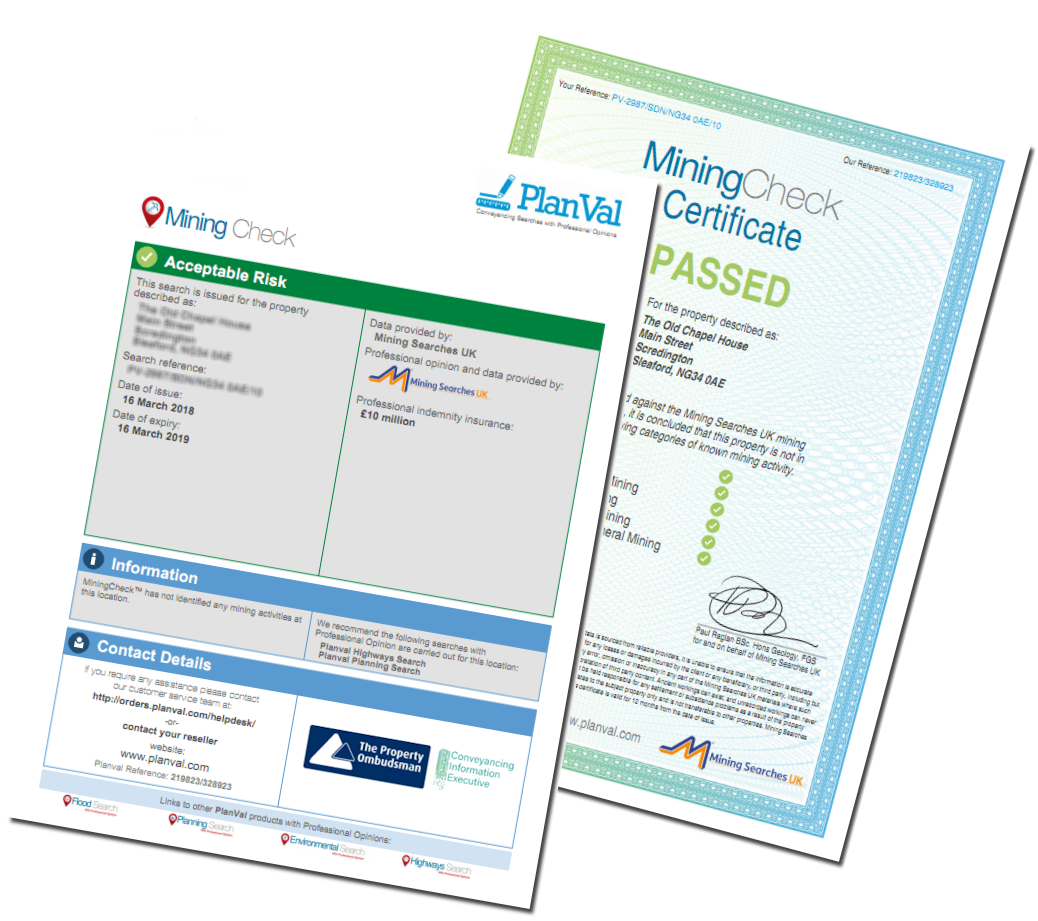 The standardised format of the report puts a clear recommendation at the front to facilitate fast and assured decision making.

This Mining Check uses enhanced datasets to detect mine related activity at a given location.

Mining Searches are required by the Council of Mortgage Lenders and The Law Society for properties located in a former mining area. 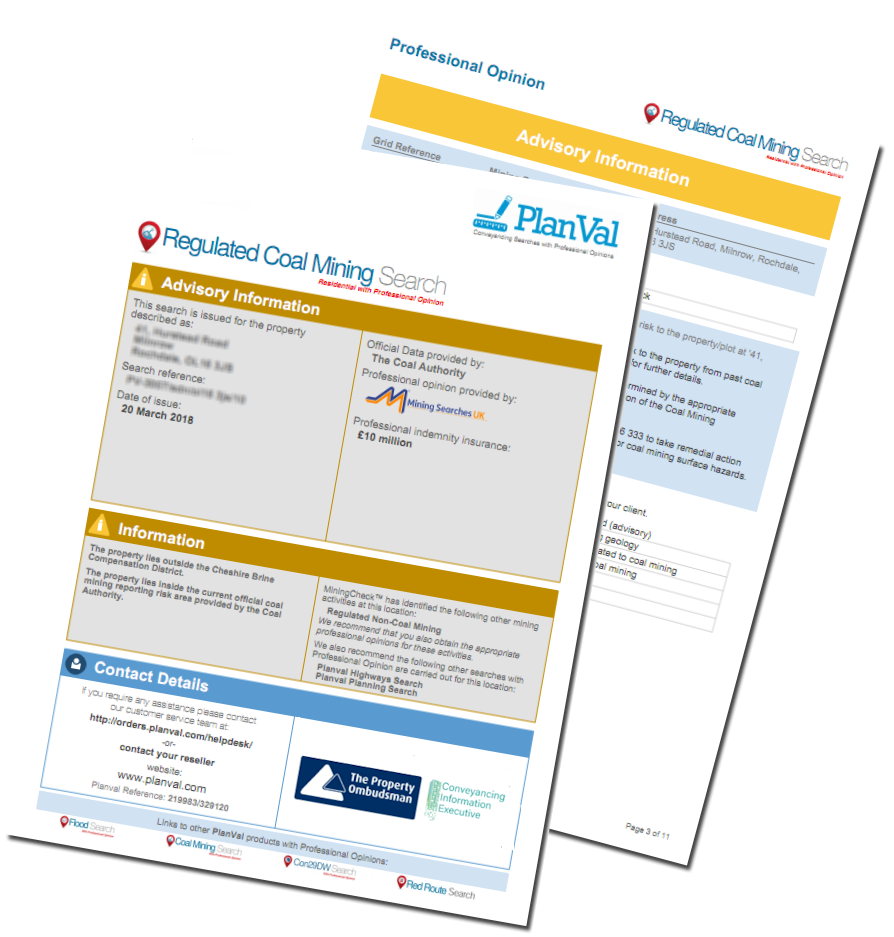 Why is Mining Data Important?
Click here for Case Studies

All PlanVal Searches include Ordnance Survey Master Map data, ensuring that the original property identification and our assessment of its location and associated risk is as accurate as possible.

Mining Searches are required by the Council of Mortgage Lenders and The Law Society for properties located in a former mining area. 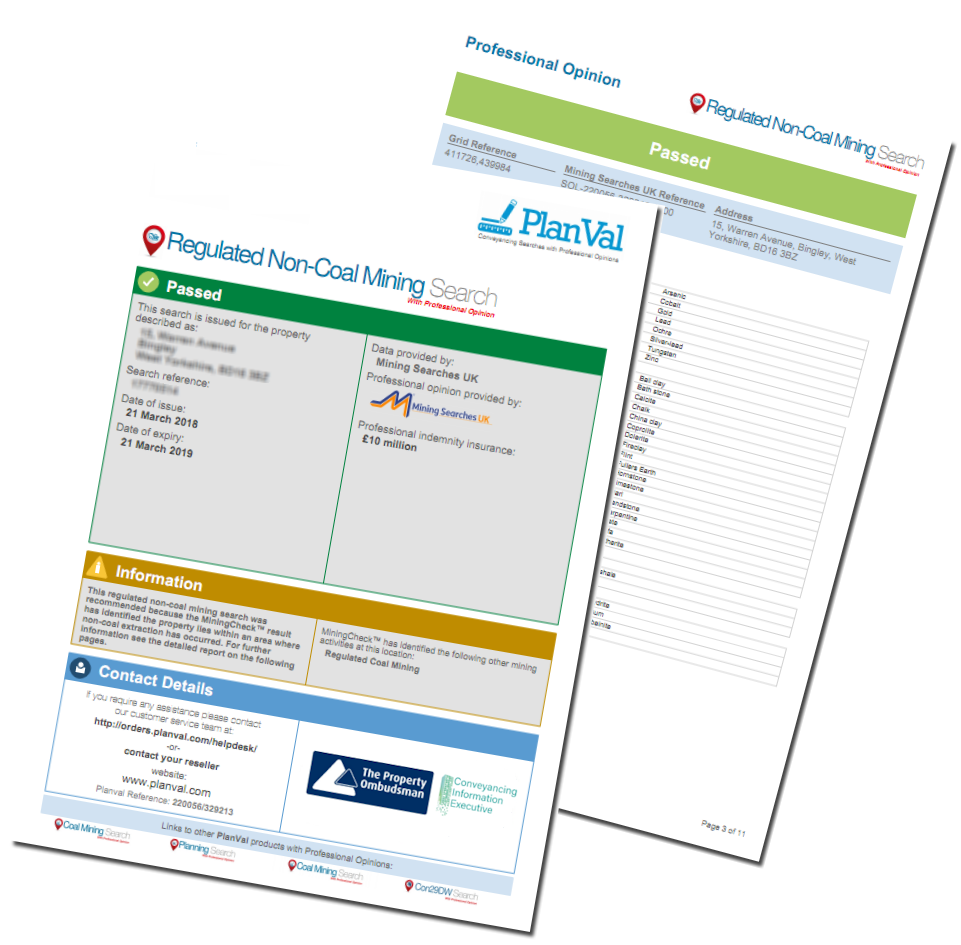 Why is Mining Data Important?
Click here for Case Studies